skip to main | skip to sidebar

One Reason Why (Most) Christians Dont Impress Me Much

Posted by Reeny
Note : This entry not to attack religion. More attacking somebodys screwed up morals and lack of sense in general. But just my opinion, the following story seems to be a common trend amongst christians? Maybe Im just real unlucky to meet all the bad eggs. *shrug*
One of my biggest pet peeves is that I really dislike people who contradict themselves. I just fell like smacking them really really hard over the back of the head just like how Gibbs does in NCIS. But anyway, carrying on...

You could say I kinda cooked up a little feud on Facebook with a guy who previously worked with me at Subway.

You can say hes pretty damn proud of being a Christian. (Its ALL OVER HIS FACEBOOK STATUSES)

You see, this guy, background info 101 (This is how the story alledgedly goes. I sound like a police now...) :

He was working one night and his friends came in for food. He made up about 4 or 5 subs and gave it to them free. To cut the long story short, there was no transaction record when asked and checked like 30 seconds later (like its real obvious there was no transaction for nearly $50 worth of food) and he right now still to this day believes that he was right to give away free food cos 'giving freebies is not stealing and its to people in need'
He gets questioned by the boss, and in his angry fit (cos he was caught?) stormed out saying he quit and blah blah blah hes right blah blah blah.

Yeah well thats all great if you actually forked out some of your own money to pay for the gifts!
So today, I happened to see his facebook status... 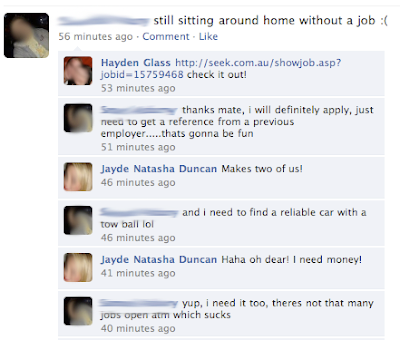 Just the first few comments from other people.
Then I started my game...
See the =_= in my first comment? Yeah Im hinting a lil sarcasm. I dont think he got it. 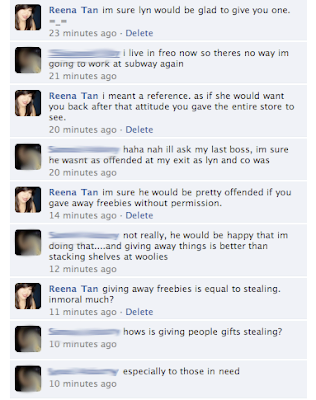 OH~! yeh well I agree that giving gifts to people in need isnt stealing. Oh Bob (lets call him Bob) you are SO NOBLE! HOW I ASPIRE TO BE LIKE YOU! *bows and vomits on Bobs feet*
Ok given that he stole to give to those in need - somewhat kind. I can see that side of the story. Ok I understand.
Pretty sure the people who walked in WERE NOT WEARING TATTY CLOTHES STARVING THEIR TUMMYS OUT.
So as you could see above, we were discussing the incident, he seems to know what Im talking about. 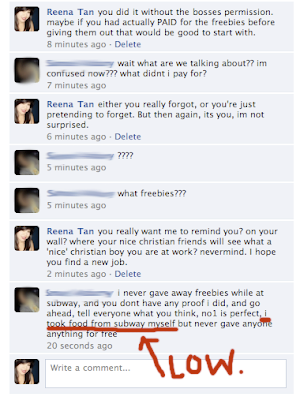 HE STARTS PRETENDING HE DOESNT KNOW WHAT IM TALKING ABOUT! OH IM SURE 19 YEAR OLDS DONT FORGET THINGS WITHIN 1 MIN, THAT FAST DO THEY?
So anyway, I just finished off with a nice gentle comment reminding him that he wouldnt want his nice christian image tarnished on facebook for everyone to see would he?
He then proceeds to tell me that he never gave away freebies, and I have no proof. Yeh ok even If i had no proof and he didnt do anything wrong,.... that would be like, end of conversation.
BUT NO HE DECIDES TO SHOOT HIMSELF IN THE FOOT!
So in the midst of trying to tell me hes innocent and has never stolen, he then ADMITS TO ME AND ALL HIS NICE CHRISTIAN FRIENDS that he took food for himself. HIMSELF.
Isnt that even lower than stealing food for others?!
He pretty much just admitted to his entire Facebook that he stole for HIMSELF.
I rest my case.
This guy cant get any stupider can he?
Well you thought wrong.
He then tries to come one full circle back at me and comments on MY Facebook status. 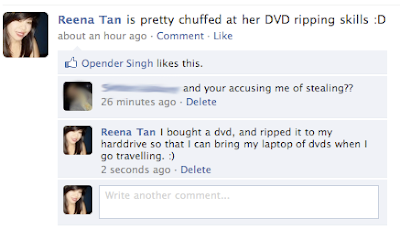 He tries to fire back saying that its still illegal because I am breaching copyright laws.
Yeh well I didnt. You know that little blurb that appears before a movie starts saying how unauthorised distribution and mass viewing is illegal and only private viewing is allowed?
Yeh that. It states that as long as it is viewed privately and not at large events, its is ok. Nothing about ripping to a laptop.
Hence, I win, once again.
You could say Im a bad girl myself for blogging this. I try to be a good girl, but at least I dont preach others. and blatantly contradict myself.
Have you had an experience like this before?

How Do You Keep Warm This Winter?

Posted by Reeny
OMG, this ad is so cute! watch it! Ill finish commenting about it below the vid so I dont spoil the show :)

CUTE RIGHT?!
OMG I so want one of those cute fat pink men to hug me!

The part when it showed the kid bouncing up and down on what I presume is a trampoline, the first time I watched the ad I thought it was still the pink fat guy and I was thinking..WTF PAEDOPHILE EWWW! =\

But anyways, what with the stormy windy winter weather and all these days, I definitely could do with ones of those chubby hugger thingys! ^^ Right now, I just bury myself under 3 massive quilts and stay in bed for as long as I can every morning hehe! Though I wouldnt mind a hot guy to hug in bed.. well hot in both senses lol.
I find that rice tends to warm you up better than pasta, but that doesnt mean Im going to eat less pasta!
Pasta FTW always.

What are your keep-warm winter secrets? (be it manchester-related, food related..etc whatever!) 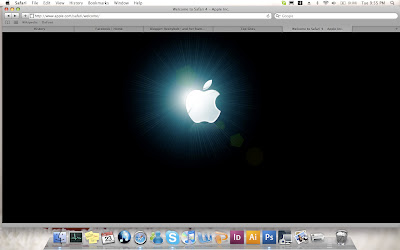 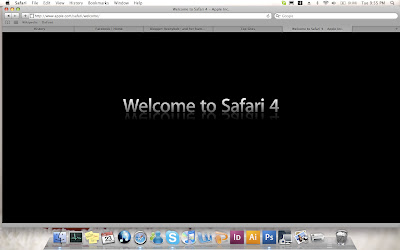 What can I say =)
I just recently downloaded the latest version of Macs flagship internet browser and I am pretty happy to say the least!
The moment I opened up the browser for the first time, it greeted me with a nice little fanfare and welcome message (see first 2 pics of this post, or go to http://www.apple.com/safari/welcome , to watch it =P) Not a useful thing per se, but it was a nice start lol.
After the welcome message flashed, it brought me to this new feature 'Top Sites' where by my most frequently visited sites are laid out in a thumbnail pattern. As you can see, Facebook = ichiban =D! (and the rest in no particular order)
You can view it in large, medium or small thumbnail sizes... 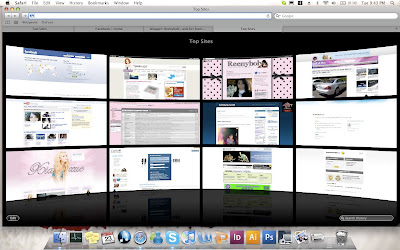 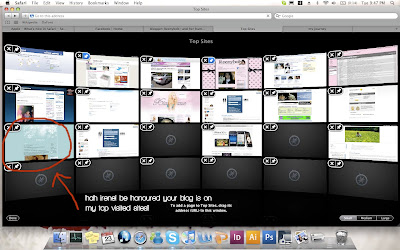 Look Irene! your blog is on my top visited list! lol. 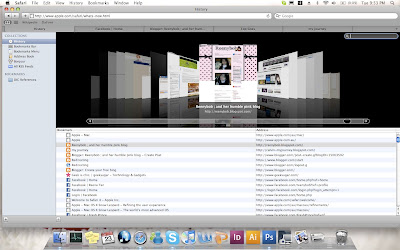 You can view your top favs in CoverFlow view, oh, and your history too. clicking the coverflow thumbnail will open up whatever that page was.
And the most important thing about web browsing?
Safari 4 is damn plucking fast. Blogs with heavy graphics such as xiaxue.blogspot.com, take say, 10 or so seconds to load? maybe more.
Safari 4 does it in half that time. Lighter sites - instantaneously.
I am one happy internet user! =D
Theres smart address bar (predicts and suggests websites as you type, pretty accurate! and as usual, damn fast) and tabbed browsing that you can arrange and manipulate however...
Of course, not all the things here are the new changes, theres like 150 all up but most are just tiny things here and there. Either way, Safari 4, Im in love with you <3
On a PC? no prob - safari is available for PC users too so we all can share the joy ^^ Go to apple.com to dl :)
So what are you waiting for?
QUICK GO DOWNLOAD! FREE TOO! WHO DOESNT LIKE A FREEBIE?! =D
2 people commented
on Tuesday, June 23, 2009

Posted by Reeny
Making my lunch now.. some korean noodles! So I did some camwhoring while waiting for the water to boil. hehe! 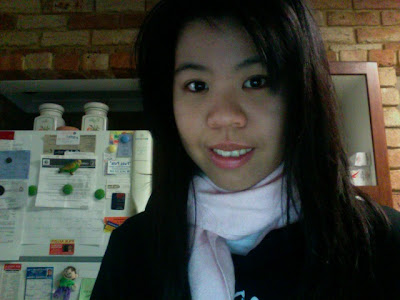 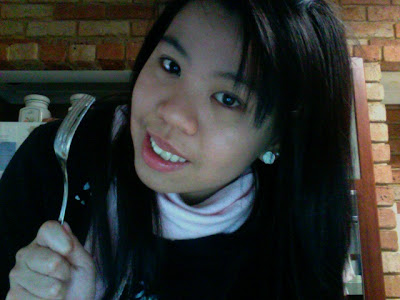 Guess what Reena is doing these days...

Posted by Reeny
Ive been greening my fingers!
Ive been growing a pot plant (ie plant in a pot, not dope as some people might suggest!) lately and to be honest, its actually quite easy! and they grow well too.
I do admit Ive been neglecting them cos you know, taking care of living things isnt really my forte (as some of you may know I accidently starved my luo han fish to death by accident when I was 15....) However, progress is progress nontheless and heres some pics of my lettuce/radish, whatever it is, ive forgotten cos there were 2 packs of seeds to begin with. oh well, surprise I suppose at the end lol.
My pot is currently 2 weeks old and very cute ^^v 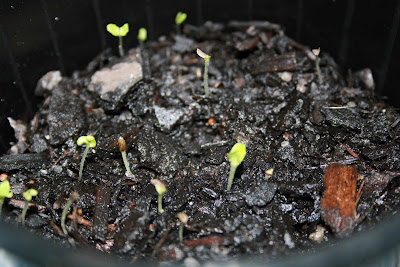 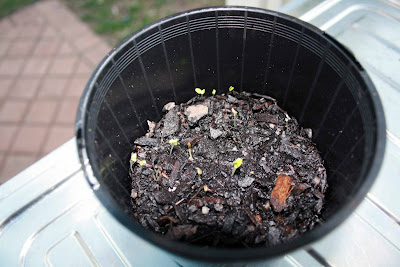 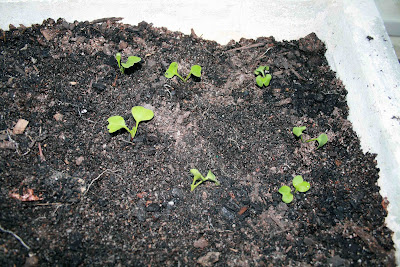 Snoopy dug up half =_= I managed to put them back into the soil and smack Snoops over the head after. 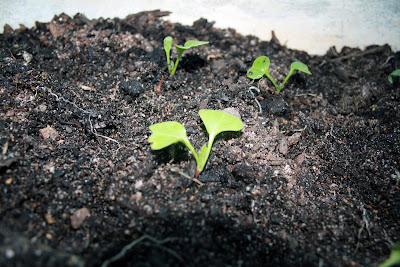 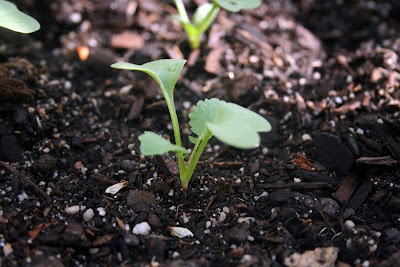 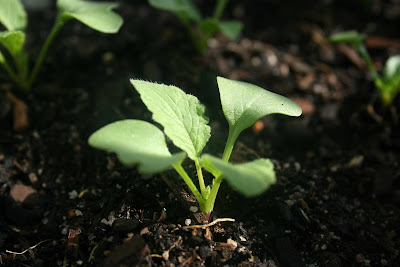 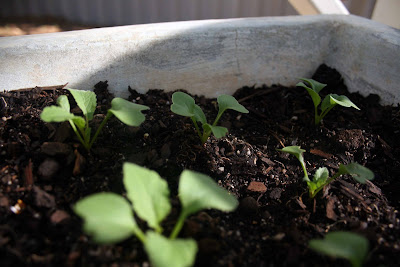 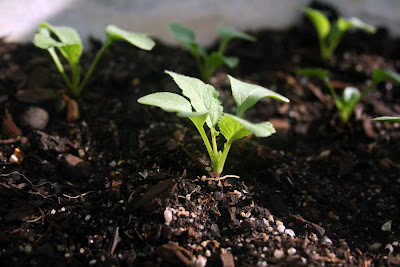